Historic preservation at Notre Dame is a multi-disciplinary course of study that unites art with science, requiring students to employ various lenses in evaluating and treating cultural heritage sites, including historic buildings, neighborhoods, and landscapes. In 2015, the School of Architecture introduced the Master of Science in Historic Preservation (MSHP) program with Professor Steven Semes as the inaugural Director. This past May the School conferred its first MSHP degree on Eric Stalheim (‘17). His thesis project, “From Archaeological Park to Urban District: A Conservation and Development Plan for the Roman Forum,” is a theoretical exercise proposing to restore the form and use of this universally valued area in the center of modern Rome. Inspired by his semester of study in the Eternal City, Stalheim’s thesis explores the question, “How can the Forum be a living space once again that is an appropriate embodiment of its historical reputation without disrespecting the past?”

A key aspect of the project is examining the admittedly controversial practice of reconstruction, which is seen by many as inevitably leading to inauthentic new environments. The best way to understand whether reconstruction might be appropriate in a given case, Stalheim reasoned, is to propose it in order to allow the restorer to examine the evidence for rebuilding the original structure and determine whether there is sufficient documentation to justify it. Stalheim’s project is, therefore, hypothetical, proposing reconstruction of selected buildings in the Forum as a means of testing our current state of knowledge of the structures and the most appropriate conservation treatment for each. 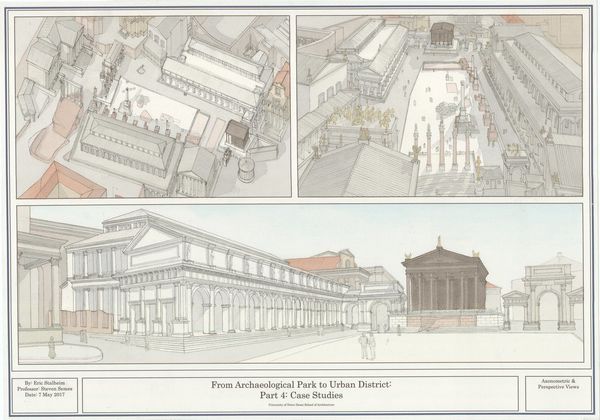 The Roman Forum, as a result of extensive damage to its remains from demolitions, pollution and natural processes, has deteriorated to the point where its original function is difficult to distinguish and it is not central to city life for Roman people.  Stalheim quotes Leon Krier to assert that visitors come to the forum “not for what it has become, but for what it once was, not for what eyes can perceive there, but for what has disappeared from sight.”  Stalheim’s proposal would return the forum from tourist attraction back to the center of Roman life.

In his thesis, Eric wrote:  “This is a hypothetical proposition to learn about treatment options in order to understand what knowledge and research is required for each. It then investigates the possibilities of reconstruction as a conservation treatment. The focus on reconstruction serves a didactic purpose as an academic exercise to evaluate the possibilities and complications involved. This teaches, among other things, how to integrate the past with the present without destroying the resources that make the site valuable to us and to future generations. This process requires the combination of archaeological investigation and research with architectural knowledge in order to provide a comprehensive outline of what remains, what is known, what was, and what could be.”

Stalheim’s project is a prime example of the values of the historic preservation program.  He has proposed a project aimed not only at preserving a historical space but one which is progressive and mindful about building our future world.

Stalheim’s thesis project is not the School’s first engagement with the Roman Forum, the Digital Historical Architectural Research and Material Analysis (DHARMA) Lab, led by Prof. Krupali Krusche, conducted a project at the Roman Forum in 2010.  The DHARMA Lab joined with Sopritendenza Speciale per i Beni Archeologici di Roma to document the current state of the Forum using a high definition surveying laser.  In addition to the laser, Prof. Krusche and a team of student workers, used hand measuring and photography to capture more detail.

After commencement, Stalheim has accepted a position at Kil Architecture in South Bend, Indiana.  As a professional, Stalheim is bringing to life another project he conceptualized as a graduate student – the Portage Theatre restoration. As a student, Stalheim created a restoration plan for the theatre and this is the first project he will undertake with Kil Architecture.  He hopes to return to Rome someday to continue his interest in Roman antiquity and the care of ancient sites.

Learn more about Stalheim’s project in this special report.

Originally published by Rosalyn Wells at architecture.nd.edu on November 01, 2017.