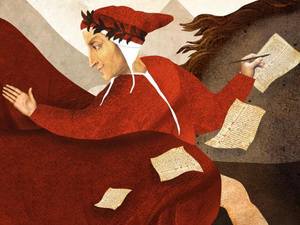 Professor Zygmunt G. Barański was recently interviewed by the major Italian daily newspaper, Corriere della Sera. In the interview, Barański speaks of the importance of studying Dante today and of new avenues in Dante research. He also talks about the workshops held during the years at the Rome Gateway, that gather together the Italian and the international Dante's experts. The interview appears as part of the paper’s initiative to institute a day in honor of the author of the Divine Comedy. Read the interview in Italian here.

Notre Dame celebrates its own Dante Day every Fall with Dante Now!—a choral reading of select passages of the Comedy preceded by a lecture from a member of the Notre Dame faculty. Last academic year the initiative was conducted simultaneously in Rome and in South Bend. Read full story here.

Barański is Notre Dame Professor of Dante and Italian Studies in the Department of Romance Languages and Literatures, a fellow of the Medieval Institute, and an affiliate of the Center for Italian Studies, of which he is also a member of the advisory board. He is among the world’s leading authorities on Dante, medieval Italian literature, medieval poetics, and modern Italian literature, film, and culture, and he has been teaching at Notre Dame since 2011. Previously, he was Serena Professor of Italian at the University of Cambridge.

Originally published by Staff at italianstudies.nd.edu on August 21, 2019.