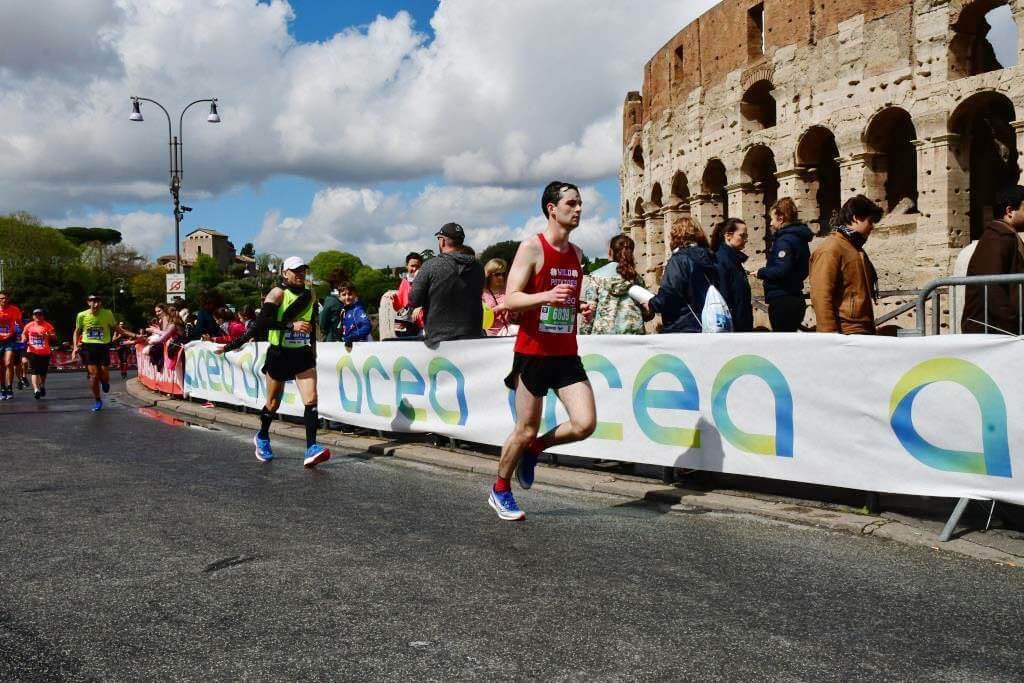 Matthew Canonico, running in front of the Colosseum

Matthew Canonico is studying in Rome with the Rome International Scholars program. On April 7, he completed the Rome marathon. Elle Dietz, a student from the School of Architecture, ran the Roma – Ostia half marathon on March 10. Both Canonico and Dietz were already runners, taking part in the Chicago marathon and the ND Holy Half. They continued their training in Rome, in hopes of gaining a unique perspective of the city. Canonico and Dietz discuss their experience participating in the 2019 Rome marathon and how its giving them a unique perspective.

When you signed up to study abroad in Rome, were you already planning on running the marathon?

Canonico: Yes, I love running and it is my favorite way staying in shape and having a concrete goal instead of the classic training in the gym. I thought that doing the Rome marathon would have been an amazing way of commemorating and remembering my study abroad experience in Rome, and it was even crazier than I expected.

Dietz: Yes. I also love running. I have been playing basketball for all my youth and when I went to college, I started running instead. I ran the Holy half marathon twice on campus. And when I got to Rome and my colleague and friend Ethan Scott asked me to run the half-marathon with him, I had no doubts at all and we started to train together. Scott was very busy with school and field trips, so he ended not running the marathon, while I continued. 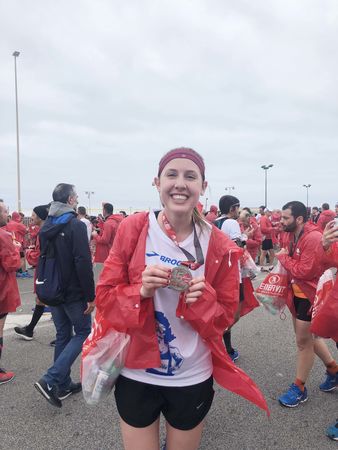 Elle Dietz, with her medal at the finish line of the Roma-Ostia half marathon

How did your training go and where did you run here in Rome?

Canonico: The training was quite challenging. I started training two weeks before leaving home (January 1). The first week in Rome I only succeeded to run once, because I was very busy and I needed to adjust. Later my goal was to run five days a week, which I got mostly done. It was tough to plan the training around whether I was going to be in Rome or not. In the beginning, I had to figure out where to run and for how long, as I needed about two hours to run. I found this very different from being on campus, because here in Rome, I needed to consider commuting and where classes were located across the city. I would normally run either in Villa Borghese or along the Tiber side banks starting from Piazza del Popolo, where I am staying with my host Italian family.

Dietz: I trained as often as I could, considering classes and field trips. I used to train at the gym nearby the Rome Gateway; I am more of an indoor runner on the treadmill, it’s easier for the weather and also for being so close to the gateway building.

Canonico: I like to focus and to have discipline. I love to overcome my limits and to go towards something concrete. I love running on my own and in the silence. I concentrate more when I don’t listen to music that would distract me from the pain and the enjoyment of the run.

Dietz: I love running because it is a nice break from school. I love sharing my training moments with some friends and to listening to pop music while running, it pumps me up and makes fatigue less strong.

Which were the difficulties you encountered while training?

Canonico: The first month I started training in Rome, the weather was terrible. It rained most of the time, and once I got really scared. There had been a warning from the Comune di Roma for the strong and dangerous winds, but I decided to run anyways along the Lungotevere. After a few kilometers, I had to stop because tree branches were falling and I felt I was getting lifted up at some point. Once I turned around facing the wind, it was really exhausting and I had to crouch in the corners to avoid the wind. I then decided to go back home.

Dietz: I actually found it very difficult to understand which were the exact protocols I had to follow in order to have all exact papers and medical statements from the doctor. 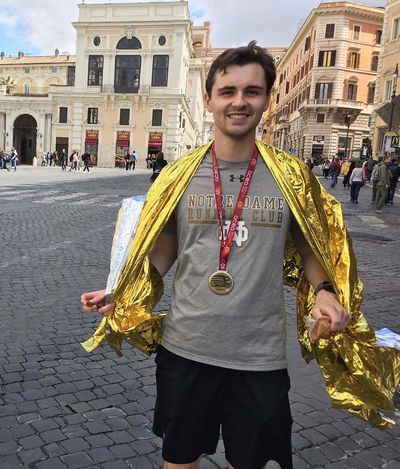 How was experience different from the previous one, and would you re-do it?

Canonico: The first time I ran the marathon in Chicago, I got very sick a week and a half before the day of the marathon, and it affected my performance. This time, I was more prepared. As soon as I passed the half point, I overcame my mental block and I started feeling very good and enjoying the whole run. Both marathons take you across two beautiful cities and you get to cross districts you have never visited before. While I was running here in Rome, I felt so lucky: The itinerary of the marathon crossed the majority of the city starting from Via dei Fori Imperiali, getting towards south crossing, Piramide, Circus Maximus, Marconi and Garbatella area, and then north passing in front of St. Peter’s Basilica, the Stadio Olimpico and Ponte Milvio and then back to the city center, Piazza del Popolo, Piazza di Spagna, Piazza Venezia and the Colosseum. I also thought that the cobblestones would have been an issue, but they were actually concentrated only in less than eight kilometers at the beginning and at the end of the race. The environment itself was very similar to the Chicagoan race. It was full of people cheering along, in this case, they cheered in Italian: I heard a lot of DAJE (Roman for GO). 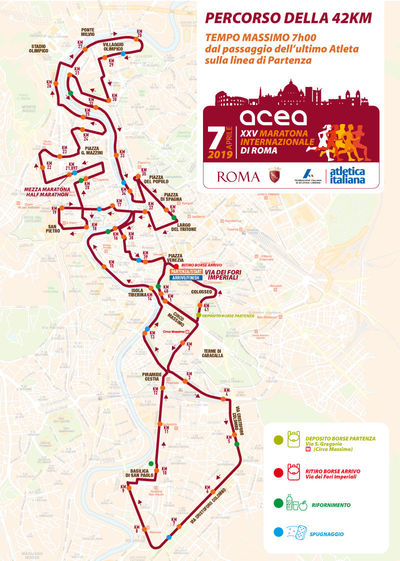 Itinerary of the Rome International Marathon 2019

Dietz: The half marathon I ran started from the EUR district, which is in the southern part of the city, and went towards the coast, arriving in Ostia. I thought the street would have been straight, but I was surprised the first part was uphill and then it went down towards the coast. We crossed a few districts but the majority was on this huge road called Via Cristoforo Colombo. It was very fun, and I am really happy I did it, but I missed seeing my friends cheering for me along the way. This is something they would have done on campus. But I loved the organization, everything was pretty amazing and we had stations with oranges along the way and they even engraved my medal with my final time in the end.

What did you notice that you weren’t expecting?

Canonico: I noticed people being very friendly. When I passed Italians, they were super nice saying scusami tanto and apologizing for occupying the space. I thought that was cute.

Dietz: It was weird to run without my friends. But I never felt alone because random people who passed by me were patting me on the back. For the first ten kilometers, I even ran together with a random person I didn’t know before, but we were giving each other strength.

What was your final time?

Would you do another marathon after this one?

Canonico: I registered for the Chicago marathon next year again, even if the ND football team will be playing the night before! In the future, I would love to travel around the world and do all of the major marathons.

Dietz: Yes, I would definitely do another one and I would love to do a full one. One day!