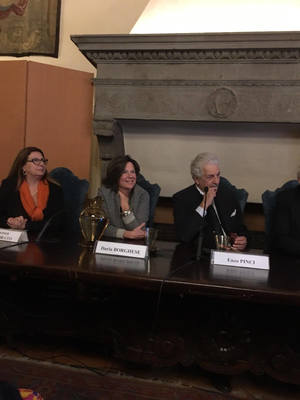 Daria Borghese, who teaches the All Roads lead to Rome course at the Rome Global Gateway, presented at Palazzo Borromeo the second edition of the book "Palazzo Borromeo. L'Ambasciata d'Italia presso la Santa Sede" during the seminar conducted by architect Enzo Pinci: "Pirro Ligorio and the Roman factories of Palazzo Borromeo and Palazzo Lancellotti."

The book, edited by Daria Borghese and Pietro Sebastiani and published by Allemandi 2019, reports the preface messages of the Italian President of the Republic, of the Cardinal Secretary of State, of the President of the Council of Ministers and of the Minister of Foreign Affairs and of international cooperation, and traces the history of the building from the artistic and architectural point of view, since its design.

A first edition of the book was published in 2008 and has been reprinted in 2019 on the occasion of the 90th anniversary of the Lateran pacts.