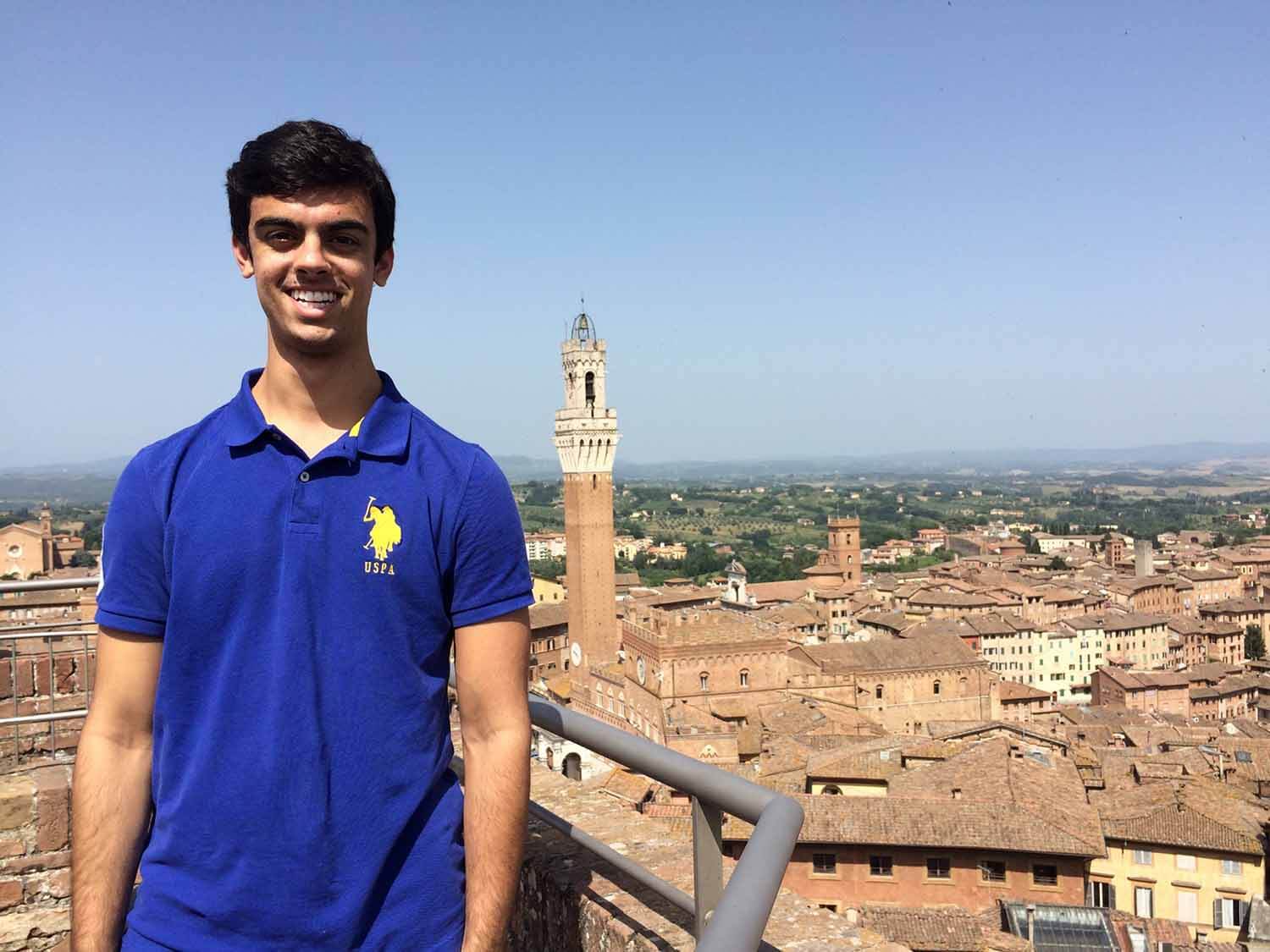 If anyone would have asked Mathew Morico when he was a child, “what do you want to be when you grow up?” He would have answered “an engineer.” So when it was time for him to enroll, Morico picked the University of Notre Dame as an Aerospace and Mechanical Engineering major.

As a third generation Italian, he took the intro Italian intensive course during his freshmen year and he fell in love with the language so that when he had the opportunity, he applied for the Ravarino Grant to study abroad in Italy. That same summer, he moved to Siena for a 4-week summer program.

Tuscany, with its cypress-lined roads, summer cicadas, tasty food and wine, and slow-paced Italian life-style, won Morico over. During his days in Italy, he lived with a welcoming local host family who only spoke Italian to him and attended classes at Italian universities. This was scary at first, but upon reflection, he says it made the difference in his experience.

On the plane back to the United States, he already knew something had changed in his life for good. His first thought was, “how do I go back to Italy as soon as possible?” His experience living and studying in a foreign country had expanded his world view and own mind and changed his perspective on what he wanted to do. After days of doubts, he decided to drop engineering and change his course of study.

During his sophomore year, Morico switched his major to Pre-med and Italian. He attended Professor Christian Moeves’ Medieval Renaissance Literature and Culture class, which threw him into classic Italian poetry and literature. Completely fascinated by it, he became president of the Italian Club at Notre Dame. The felt this was the right decision, as he was finally studying something he really loved and cared about. During his junior year, Morico applied to go to Rome through the General Education Rome Global Gateway Program.

And Rome, well, Rome is Rome. When he arrived he was in awe of its beauty, walking past architecture, art, and history every single day of his semester. It left him speechless. He was among the first students to begin living at the ND Villa in the Celio district, which made his experience even more exciting.

“My experience in Rome was simply perfect, “says Morico. “I met so many people I am still close with, students in the program and also local Roman. During the semester I had the opportunity to do an internship at the Vatican Pontifical Academy for Life which also exposed me to local Italians with whom I have created bonds that still exist now.”

When Morico went back to campus, the story repeated itself once again, as he looked for the opportunity to go back to Rome as soon as possible. He wanted to combine his studies in Pre-med and Italian with an internship. He applied for a job at Salvator Mundi hospital in Trastevere through a Nanovic grant. When he was awarded it, he was incredulous. He was going back once more to the Eternal City, this time, for the summer.

He started to work in the hospital shadowing a doctor named Anna Lisa Bilotta, an endocrinologist, and general internist, as well as an orthopedic surgeon and psychiatrist. During those months Morico’s attention was focused on how things were managed differently in Italy, especially how doctors would provide suggestions for lifestyle changes to patients instead of exclusively prescribing medical treatments.

In fact, it is this kind of doctor-patient rapport that will be analyzed in Morico’s final thesis, focused on why depression is such a greater problem in the US than in Italy.

Morico’s study abroad experience changed his life, setting his personal and academic path ablaze. His love for Italy will remain constant and in the meantime, he organizes aperitivi with his former Rome villamates every so often to keep from feeling too nostalgic.